The Paris Hilton Entertainment logo you see above is a reproduction of the original version.

Logos and Symbols I

Paris trademarked her name in mid 2004 for use on fragrances, body lotion, bath gel, soap, cosmetics, etc. Below is a picture of the first Paris Hilton symbol she adopted in 2004. 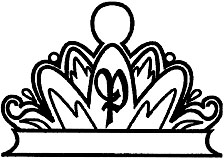 Paris also adopted a logo for her name. This one surfaced in 2004 when she started launching her fragrances. It is the official logo and font of her name.

Paris later introduced another logo and symbol. The symbol below is the official one that is used to represent her. It can be found on her footwear and clothing collection. The Paris Hilton symbol is placed between her first and last names.

In early 2010, Paris revealed another new logo with the launch of her official website ParisHilton.com. The logo is titled "PARIS HILTON AND THE LETTER P." Given description of the logo: "The mark consists of a Crown design with a stylized 'P' and diamond period design, a swirl design on each side of the letter 'P' and the words 'PARIS HILTON'".

Paris Hilton Entertainment is located at: